My Travels of the USA

America – land of the free, land of the brave and as we found out land of some rather amazing vintage shops and places to visit!

Our trip started in the Big Apple, with the first morning starting with a diner breakfast in a fabulous little diner called The Metro Diner, I absolutely love American Diners, the décor, the music even the staff uniforms and the pancakes weren’t bad either! From here we took the subway to the Empire State Building, which was quite a challenge as my friend had foolishly fell down the stairs and broken her foot a few days before our travels. Luckily we managed to find a shop to hire a wheelchair from (well, I say luckily, not so much for her having to put up with my driving as it turns out that I’m not very good!)

The grandeur of the Empire State Building is apparent as soon as you see it, personally I really liked the 1930’s architecture from the inside more that the outside, especially the large image of it carved into the walls on entry. Upon taking the lift to the top, you can then see all of Manhattan, right out to the Statue of Liberty. The views were awe inspiring and nothing like anything I had ever seen before.


After this we headed down to Lower Manhattan and Battery Park to embark onto our trip to the Statue of Liberty and Ellis Island. I’m not sure what I really expected from the statue, after all we’ve all seen it many times in films and TV shows, but up close it seemed a lot bigger and more tranquil than I had imagined. The views of Manhattan from the island were amazing and gave us some great opportunities for photographs. Here I am wearing my Jurassic Park Dress, my favourite of all my dresses which I made from a pair or Jurassic Park curtains from the original film in the 1990’s. The trip also took us to Ellis Island which is where all of the immigrants who came into America passed through, the idea was that they were greeted by Lady Liberty as they started their new life in the USA.


The next day we headed to the Natural History Museum, where I was the most excited to meet the Easter Island Gum-Gum Head and Rex the T-Rex from the film Night at the Museum. There’s a load to see here, so you really need a good few hours to look around, we were there until close and had to be asked to leave! Times Square was the next on our list, we had been saving this for the evening as we wanted to see it in all of its glory, and we were not disappointed! It’s just how you imagine - big,
loud and fabulous!

This museum is a boneyard of old neon signs from Vegas’s heyday. You can see classic signs such as the Stardust, Sahara and Tropicana all here, some of the signs date right back to the 1940’s and we were informed that they can be dated by looking at the light fixings – the oldest signs were made so that the workmen could climb up them to replace bulbs individually and therefore have stirrup’s up the side to climb up, in the days before cherry pickers!

We met some other vintage enthusiasts at the museum, who were all dressed for the occasion and looking fabulous! I was lucky enough to bump into them again a few days later at the Welcome to the Fabulous Las Vegas sign, where they were taking a trip with Elvis in a Cadillac to see all of the vintage sights of Vegas – something which is 100% on my list for next time! Elvis was nice enough to let me get a couple of pictures with him at the sign and with his beautiful pink car!

We were staying at the Rivera, and sadly will have been some of the last guests to stay there as it is currently being pulled down to make way for a new hotel. I think this is such a shame as it is one of the oldest hotels on the strip and has had some iconic performers there since it opened in the 1950’s.

My favourite of the hotels on the strip has to be the Flamingo, the oldest remaining hotel on the strip and built in the 1940’s, its changed somewhat over the years, but still holds some of its nostalgic charm and I loved meeting the real Flamingo’s in the gardens! If you go to the Mob Museum which is located Downtown, you can find out a lot more about the history of Las Vegas or Paradise as it was once named and how the mafia turned it into the gambling city it is today.

I always feel sad leaving Las Vegas, but I guess it’s not so bad if you’re leaving to go to San Francisco. I’d never been before and I wish I had never had to come home! What an amazing city - the tranquil water front areas with piers, lots of sea lions, the Golden Gate Bridge and views to the National Parks and Golden Gate Bridge and Alcatraz mixed with a bustling city.

The city itself contained the most fabulous area of vintage shops in Haight-Ashbury. My favourite shop was Goorin Bros -  a very traditional hat shop, filled with fabulous hats, vintage furniture and the sales assistants were all lovely, if that’s not enough they also make popcorn all day which they give out to everyone who comes into the shop! Just next door is Love Street Vintage, where I purchased the most adorable Vintage Wooden Bag for just $65! This area is particularly exciting as it is not only filled with fabulous shops, but there is art everywhere you look, street art on the walls of shops and buildings and it is the location of the Painted Ladies – three of the most beautiful houses in San Francisco which are highly listed as they have survived lots of earthquakes!

I was excited about jumping on a tram to all of our destinations, one of the most exciting being Alcatraz (of course this involved a boat too!) Not only was it interesting to see the history and architecture of the island, but also an art display about freedom from incarceration was on show at the time of our visit, the most beautiful colourful dragon adorned one of the main buildings, bringing colour to a once miserable place.  It was a bit chilly on the island, so I’m glad that I wore some amazing 70’s style jeans which I found in H&M in New York for the bargain price of $25 matched with a Collectif pink jacket. I spent most of the day pretending to be a professional photographer, taking over 1000 photos of everything in my sight!


The last place on our trip was Los Angeles. It wasn’t until we got there that I found out the hotel I had booked, the Cecil in Downtown LA was the home of a serial killer in the 1980’s and the location of where he murdered all of his victims – luckily there was so much to see and so many parties to go to that we barely spent any time there, and on reflection I guess it’s better to stay somewhere with some history surrounding it, even if it is bad!

I made my way to Santa Monica and Venice Beach on my first day and had to retrain my temptation to sing ‘I’ll be Ready” and run in slow motion across the beach! The art here on the walls again is really colourful, Venice was a really interesting place to learn more about – it was once full of canals based on its Italian inspiration before the city filled them in.

The Hollywood sign and Walk of Fame were also high on my list of must see's as they are for most people visiting LA, I was slightly disappointed that I could not get closer to the Hollywood sign but seeing the stars on the Walk of Fame was amazing. On this day I wore my Silly Old Sea Dog Pink Heart dress, although I did get slightly hot in the LA heat wearing a petticoat! Located on the Walk of Fame is the Max Factor studio where Norma Jean Mortenson became the platinum blonde Marilyn Monroe, and there were a couple of great vintage shops, my favourite was called Iguana Vintage Clothing where they had a huge 2 floors of vintage, including a dress which I really wanted, but couldn’t quite zip up!

I can’t wait to return to the States where I have plans to visit more cities and more fantastic vintage stores!

I hope you enjoyed reading about my travels to the USA!

PS: Most of my dresses are from my brand Silly Old Sea Dog, you can find them here

I recently posted about my lovely day with Mish Online and Panache.

As part of the day I took home a lingerie set from Panache, I chose my favourite - the Minnie which is by Cleo (the younger trendy line by Panache).


I was excited to get my set home and try it on properly. I was measured by the lovely team at Mish Online as a surprising 34 DD, so I took the bra home in this size along with the pants in a size 12.

Having now worn the set a few times, I can honestly say that it is very comfortable! The fabric feels nice against your skin and you can tell that the quality of the manufacture is high. The bra is boned on the cup and also has bones at the side. However unlike other long lines I have purchased before there is no boning at the front - this makes the bra far more conformable to wear.

If I'm honest, I am used to wearing a bra which is more padded as I am always conscious about having small boobs, but although this set had a lot less padding than I am used to, it surprisingly didn't make me feel flat chested, I am actually happy with how it looks with clothes on.

I love the colour of the set, its really bright and fun. And I think I would actually wear the bra as a top, I think with the right high waisted skirt it would look good! And its gives enough coverage to get away with it.

You should also check out the other lines that Mish Online have in their Sale there are loads of bargains to be had! I also cant wait to see the new season lines from Panache, as I've seen a sneak preview of them and there are some lovely sets which will be available from early August.

If you want to get measured, you can always contact Mish Online to arrange and appointment at their shop in Cornwall or use their online Bra Calculator - which is a really helpful tool, should you not live near the shop.

With the set here, I am also pictured wearing a headband from Silly Old Sea Dog and my Bambi Shoes are from Irregular Choice.

Let me know what you think of the set. 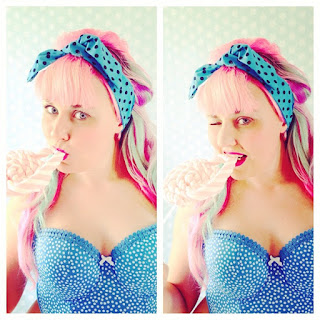